A retelling of the Grimm Brothers’ ‘Little Red Riding Hood’, Little Red sees the infamous grandmother’s and Little Red’s descent into madness and explores the drama that unfolds thereafter. Yet it is also an intrinsically personal piece – as Maria Theuma will explain further on – and one that doesn’t take the famous fairy tale at face value.

Here we talk to the scriptwriter Maria Theuma on how the idea came to be, how personal it got, and what inspired her to sit down and write it.

“Stories were an integral part of my childhood,” says Maria Theuma, the scriptwriter of Little Red. “As I was growing up my parents filled the house with books, and I remember ‘Little Red Riding Hood’ being one of the earliest fairy tales read to me by my mother.

“Even though I was a child, I somehow suspected that Little Red knew that she was in fact getting into bed with a wolf and not with her grandmother. I guess you could call Little Red my first feminist icon. I wanted to revisit the tale from a different angle, and to project my own personal experiences onto it. In fact, Little Red is extremely personal.

“Writing is a necessity for me because it’s my way of processing the world and of processing myself. It’s a very narcissistic practice. Little Red came about because I’d been through some shit and I only felt liberated when I put it down on paper and mythologised it into a story that became greater than myself and my experience.

“The fact that it’s going to be performed in front of people I might not even know is quite terrifying for me because most of it is pure confession. I’m in awe of all the great confessional artists and writers of the 20th and 21st centuries: Frida Kahlo, Sylvia Plath, Elizabeth Wurtzel, Tracey Emin, and maybe I should add Miley Cyrus to this list…

“Although Little Red is an independent production, I have previously worked with Naupaca Dance Factory, on both large-scale productions and smaller dance-installation pieces, and I’m truly indebted to it, artistically. It has helped me grow and understand the dynamics of theatre and I’m now a scriptwriter within a team of choreographers, dancers and artists.

“Scripting for dance is very different than playwriting because you have to keep in mind that everything you come up with has to be further translated into choreography. I’m really interested in body movement and I find collaborating with Naupaca to be very rewarding. Little Red is the first play that I have written for stage and with it I wanted to explore and experiment with the intimacy of language, but unlike in dance theatre, this time there will be no barriers between actual words and audiences. 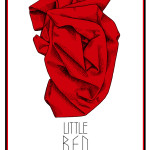 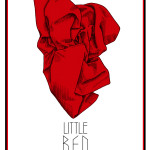 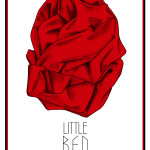 “This makes its reception somewhat of a mystery and I honestly don’t know what audiences might take from Little Red. I don’t feel like I should impose anything on anyone or tell them that they should feel this way or that. Everyone’s free to internalise what he or she sees in a thoroughly personal way.

“Finally, I just wanted to thank all the insanely creative individuals who’ve worked so hard to make this happen. Rob Ricards, who believed in the play from the moment he read it, and without whom none of this would be possible. Julia Camilleri and Marion Sayers, who scare me with their intensity; Adrian Abela, whose artwork is impeccable; and Luke Azzopardi, a wonderful designer and friend, whom I first met on a dance floor, in a tacky nightclub, back in 2010 – we’ve been inseparable ever since.

Directed by Rob Ricards, Little Red stars Julia Camilleri, Marion Sayers, Abiodun Abeyemi and Joseph Muscat. Costumes and sets have been designed by Luke Azzopardi and the artwork by Adrian Abela, and the play will open this weekend at St Ursula Hall in Victoria, Gozo.

Little Red is on at Saint Ursula Hall, The Citadel, Victoria, Gozo on 10, 11 and 12 January from 8pm. Tickets cost €5 and can be purchased from Bargate Book Shop, Victoria, Gozo, by calling on 2156 2498 or by e-mailing at markthorogood@gmail.com. Audiences are invited to remain for a Q&A session with the cast and crew after the performance. You can join the official Little Red event page on Facebook by clicking here.