The Archaeology of Acoustics

Ancient sounds and the science behind them: Malta is the seat of the world’s first archaeoacoustics conference.

As anyone who knows me knows: I am a total history buff and watch at least three solid hours of documentaries a day (usually first thing in the morning and while I’m snoozing off late at night); so when I was invited to the opening of an archaeoacoustics conference here in Malta I got pretty excited.

Organised by Linda Eneix, a conference organiser who is based in the US, this conference has put Malta’s pre-historic sites at the centre of this research, particularly due to the fact that some of the most important and influential people in the sector have flown in especially for it.

“People attending the conference are qualified to take it to the next step,” says Ms Inex. “If one theory tests out, as we suspect it might, then our Stone Age ancestors have left us a gift that has incredible relevance in the modern world: one that, for all our techno-savvy smartness, we would probably never have thought of again.” 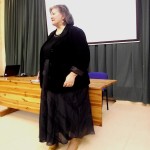 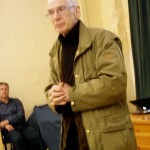 Over the course of the next three days, in fact, the world-famous Hypogeum in Hal-Saflieni is going to be the centre of a locational study on how sound and space come together to create sacred architecture – and this was specifically yesterday’s topic of choice at the opening of this conference, headlined by the French Professor Iegor Reznikoff and Malta’s very own Professor Richard England.

Speaking of how buildings were built not only to be seen but also to be listened to, Prof. England explained that Malta’s 42 prehistoric sites ‘are not only worth mentioning, but are the only ones worth mentioning.’ And using the word ‘architecture’ as a verb rather than a noun, he pondered the true use of Malta’s historical sites and what they did for the people of the age.

The idea that places like the Hypogeum, Ggantija and even the painted caves in the South of France linked the profane to the sacred was one that reverberated throughout the whole conference, with Prof Reznikoff describing his theory that the density of paintings in caves is proportional to the quality of the sound (the more echoes the better the quality is).

The conference was closed with a multitude of performances, including two bag pipers clad in traditional Scottish tartan who filled the Ex-Royal Naval Hospital in Bighi with the skirl of pipes; the haunting sounds of a rare Australian tarhu played by Ros Bandt; and Stephanie Conner performing an ancient Babylonian song.

The world’s first archaeoacoustics conference is supported by Heritage Malta and the Corinthia Palace Hotel & Spa. You can view the official press release for it by clicking here. For more information or photos for press, please send an e-mail to Jo Caruana.