A Tale of Two Titties 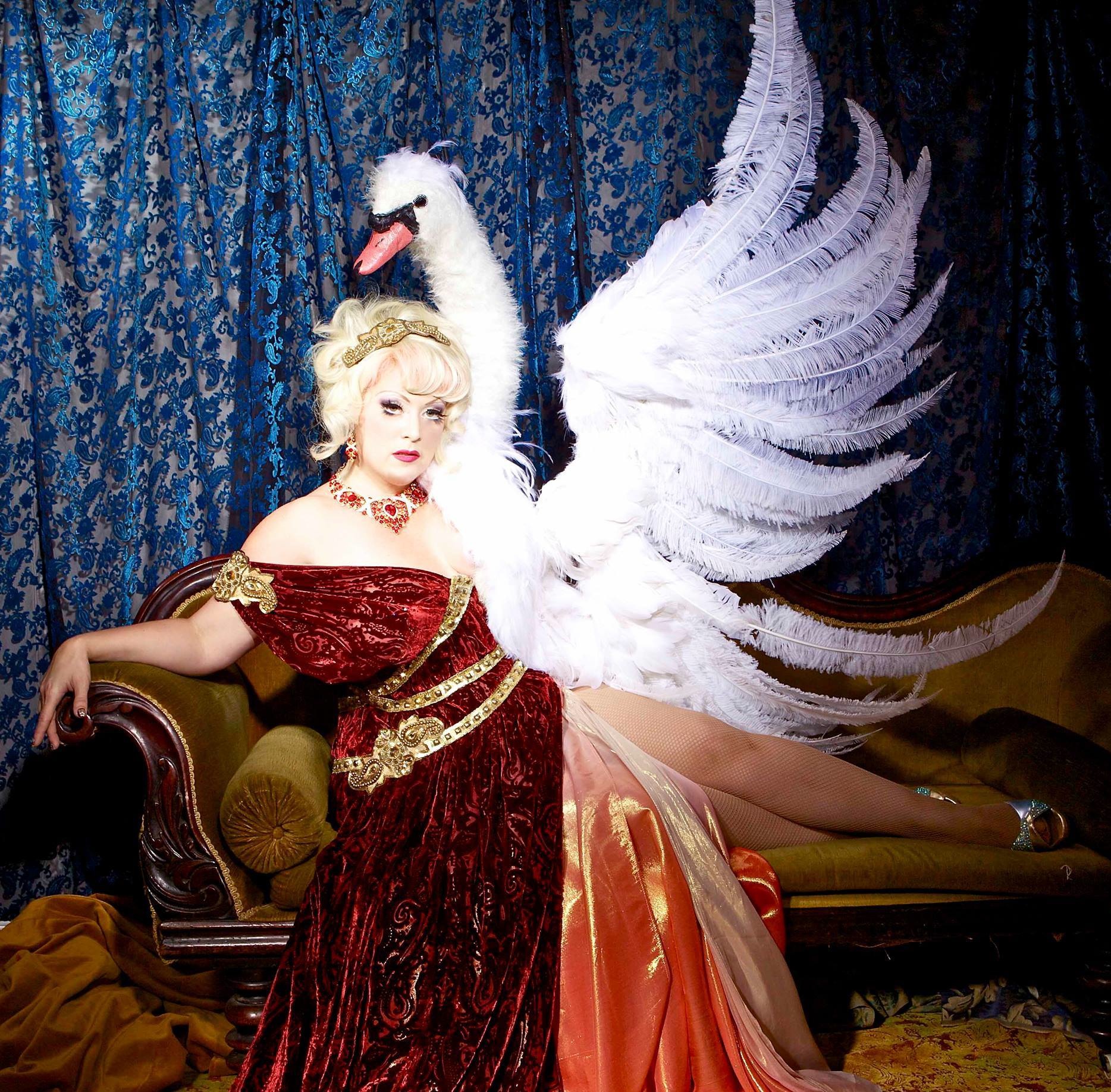 Dirty Martini and the Swan by Neil Kendall

The latter revelation came as I was slowly being encircled by screaming girls – and boys, and men, and men dressed up as women, and women dressed up as Victorian maidens – hugging freshly-signed copies of Dita Von Teese’s book, eagerly awaiting her appearance on stage. Yet, whilst I had, myself, squandered a whole day analysing weird contraptions and sifting through copies of Be Gentle, It’s My First Time and Dirty Hairy, just to get the chance to see Dita perform, I had never made much of this burlesque business until then.

The art of burlesque turned out to be one of the main focuses of my life that year as one of my university assignments revolved around the notion that burlesque is empowering to women. This opened up a whole new world for me, and I got to correspond with some of the greats in the business, including Jo King – the founder of the London Academy of Burlesque, Chaz Royal – one of the most famous Boylesque performers in the world, and the devastatingly beautiful Dirty Martini – a New-York-based performer who has been crowned the best of 2013 in all the lands. 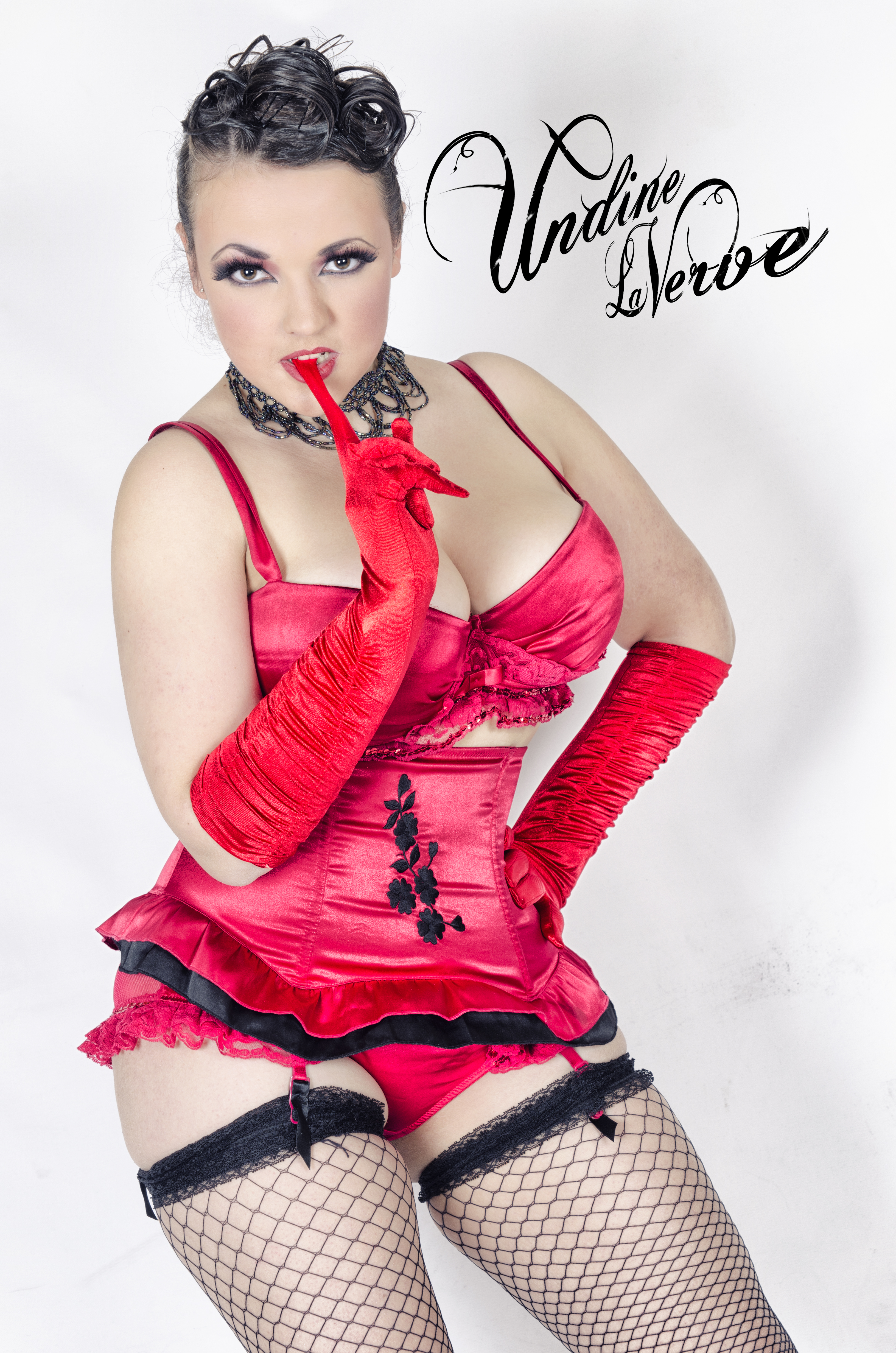 Burlesque as we know it today, has been around for over 100 years, and the true title for what I am talking about is American burlesque, which is a spin-off of Victorian burlesque. The latter was risqué in nature and often mocked popular theatre and music, and of course, politics. It went out of fashion in England in the late 1800s but, stateside, it was flourishing with ever-increasing female nudity. American burlesque had become a cheeky way of commenting on social occurrences – and that makes it all the more interesting and important to a democratic society.

Nevertheless, burlesque in Malta has never really taken off. And, although I have done my best to attend anything with the word ‘burlesque’ in it, few seem to appreciate the true nuances of this craft. And by few, I mean one, and her name is Undine LaVerve – Malta’s only, proper American burlesque dancer.

Here, she interviews Dirty Martini… on the evolution of burlesque, its comeback, and its role (or lack thereof) in European and Maltese society.

UNDINE LaVERV: You are one of the best-known burlesque dancers, involved in the modern revival of the style on a global scale, but how do you feel about this recent commercialization of burlesque?

DIRTY MARTINI: Although I don’t feel that real burlesque can ever be fully commercialised, I’m very proud of what we’ve achieved since I started performing in the early 90s. I used to think that popular culture, in particular TV and movies, dictated style, but now I know better. I saw my drag performer friends influence an era of art and culture. Now, myself and a few friends, are the ones who have had this kind of power over the creative world.

Burlesque is all about authenticity, and you can feel it in a performance if someone hasn’t done their research or worked on their number. That’s why inauthentic burlesque will never be popular, because the thing that made burlesque popular in the first place was the individuality and freedom of spirit that it represents. Without that joie de vivre, you only have a vacuous fashion parade. I have seen many commercial ventures trying to cash in on the popularity of burlesque and they have all failed because of their lack of humanity. 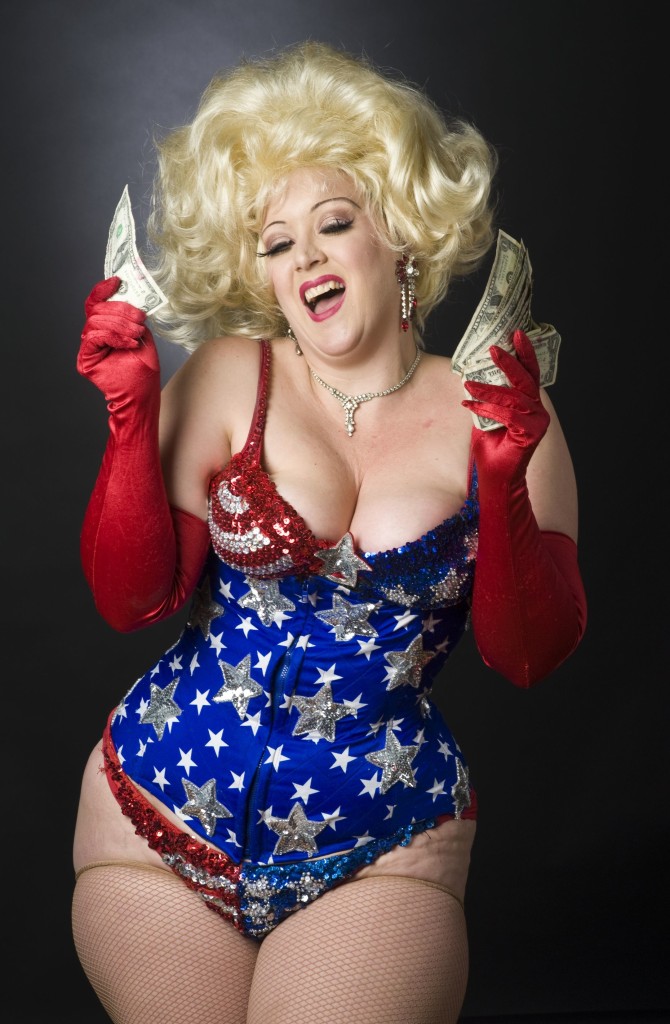 ULV: How different was the scene 10-12 years ago when you started out? Was it a struggle to find shows, like-minded people and acceptance from society?

DM: When I started researching burlesque in 1995, there weren’t any burlesque shows and it was not popularly understood. Burlesque meant seedy strip joints and did not have a connotation of glamour or self esteem issues that are commonly associated with burlesque nowadays. It’s thanks to Dixie Evans – the Marilyn Monroe of the golden age of burlesque, the woman who created the Miss Exotic World Pageant and Baby Doe and who produced Tease-o-Rama – that strip teasers came together for the first time to understand that a real revolution was underway.

My first shows were in drag clubs and gay bars because gay men were the only people in the beginning that still knew what burlesque and Pin-Up was. They understood the glamour and the style and didn’t question why there was a woman stripping in a gay club. It was unique and they understood the kitsch and fun of it. There were important stylists, make-up artists, photographers and creative minds in those clubs that we influenced, resulting in films like Moulin Rouge and Burlesque. After burlesque’s proper resurgence, the rest of the world caught on to it and now there are burlesque nights and clubs everywhere!

ULV: The New York City burlesque scene is very “performance art”. To what extend does that affect your acts?

DM: In New York, you never have to wonder what people really think. New Yorkers are very frank about what they are thinking and feeling. That’s why we have such a reputation for being rude, but in reality, we are the friendliest people of all. It’s that way with our burlesque scene, too. If a performer is working through a problem in their life, it generally comes out on stage. New York is also a hotbed of all types of stage work, so that’s why we became famous for performance art. Even our subculture has a more obscure subculture behind it.

Because the first wave of burlesque performers came from all kinds of backgrounds – visual art, dance, theatre – we had different approaches to making a performance.  Now there are schools of burlesque and examples to follow. In the beginning we were inventing it so no one thought to come up with words like ‘classic,’ ‘performance art burlesque’ or ‘Nerdlesque’. If we wanted to try something, we just did. It wasn’t until I went to the UK in the mid 2000’s that I heard someone make a sub-category of burlesque.

That said, New York is the best place to try new material; in fact, for a number of years, every burlesque venue I regularly performed in would unexpectedly get a new paint job, mirrors, lights and a carpet and would stop smelling like a deep fryer. I would later find out that Joan Rivers, the legendary comedienne, was using the club to work out new material in front of small audiences! I still think of New York and the supportive performance community there as the place where all of my numbers are born and developed, and even though the city has a reputation as the place where crazy shows happen. 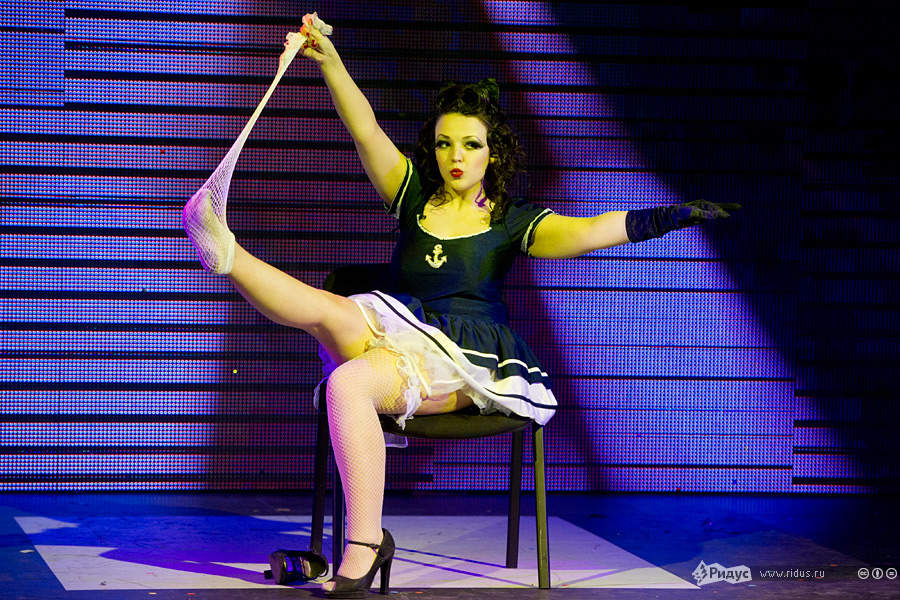 ULV: How different is a European audience, when compared to an American audience?

DM: In general, European audiences have more knowledge about the theatre and theatrical history and there is a wider variety of people at the show. With the Cabaret New burlesque, we have the opportunity to play beautiful subscriber houses whereas in the US we mostly perform in bars and clubs. For Dita Von Teese’s Strip Strip Hooray show, we are sponsored by a huge music promoter, but the tour is still presented at House of Blues or other music venues. When an audience is in a bar or rock club, the reaction to the show is similar to a rock show than when performing for an audience in a proper theatre. Nevertheless, after the release of the film Tournee, our audiences in France have been extremely enthusiastic thanks to our notoriety and prompting.

ULV: You’ve performed in Italy and Sicily, where burlesque is thriving. What was your experience there like?

DM: Italy has a unique take on burlesque, and while, culturally, I’m not sure I understand it, I still love performing there. It was the first place I found the tradition of visiting a performer’s dressing room after a show, and there I was, naked as the day I was born, and the other performers were horrified knowing that VIPs from the audience were on their way! They got quite a surprise because I forgot to pack a robe!  Also my toilet was full of the most beautiful long stem roses. They were so huge I didn’t have a place to put them, but they fit perfectly into the toilet and to change the water all I had to do was flush!  I was treated like a queen in Italy because of the wonderful people at Micca Club, and I’m happy that Alessandro Caselli is there to show the people of Rome what real American burlesque is all about.

ULV:  I’ve been working on establishing a burlesque scene here for a couple of years now and it’s proving to be quite a challenge. From the days of the revival, do you have any advice?

DM: I think that the best thing to do is create a show that you like. Make the show what you would want to see and do the best that you possibly can. Make it the most generous show ever created and just give your ultimate joy to the audience and they will surely respond. There are plenty of people who live spiritual lives that aren’t bogged down by conservative conventions.  If I could perform burlesque successfully in Braga, Portugal and Salt Lake City, Utah, you can surely make it happen in Malta! People will come from miles around and you will find your audience. 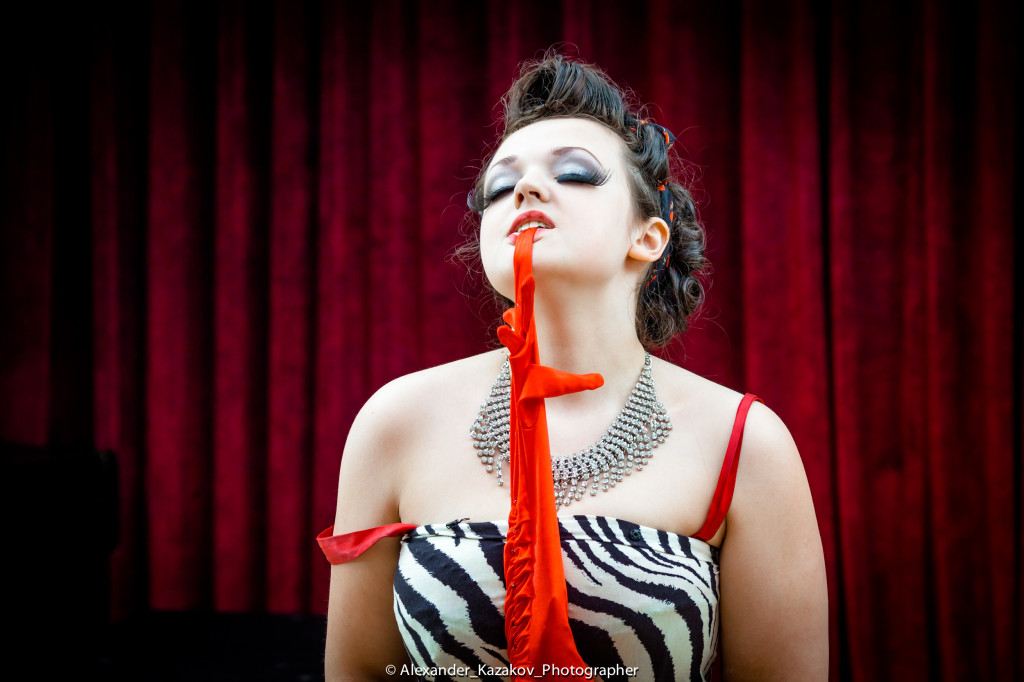 ULV: Would you ever consider gracing Malta with a performance?

ULV: What do you think the future of burlesque holds for us?

DM: That, my dear, is up to you and the next generation of burlesque performers. I just ask that the original legends of burlesque are not forgotten but exalted. Never forget about the neo-burlesque innovators, like Tigger!, Julie Atlas Muz, Murray Hill, Catherine D’Lish, Bambi the Mermaid and all the others who made ‘burlesque’ practically a household word worldwide.

Featured image is the amalgamation of Dirty Martini the American by Leland Bobbe and Undine LaVerve by Denis Trubetsko.